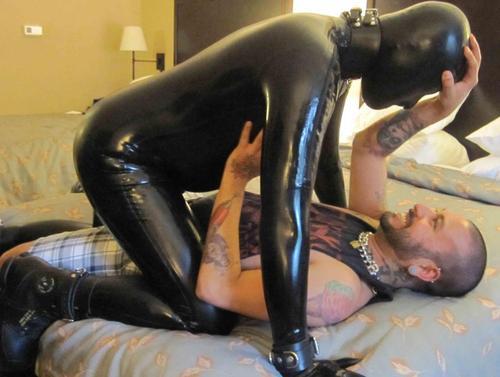 Done. It was done. Marco looked at Hugh, or, he looked at his new rubber gimp slave, who had been Hugh just a few days earlier, but who was now nothing more than a mindless drone, programmed to fulfill all of Marco’s sexual desires.

The liquid latex solution he’d gotten at the store had sounded too good to be true, but getting a bit of it onto Hugh had been easy enough. From the small spray he’d snuck on him while they were out drinking, the rubber had spread to cover Hugh’s entire body, and over the next few days, would finish rubberizing Hugh’s internal organs–making him effectively immortal. They would never be apart now–never.

His slave climbed up onto the bed, over Marco, and he ran his hands over the smooth rubber body…when his hand hit something…sticky. He pulled it away, and just stared at his palm, which was covered with latex. He flexed, it, but it was already dry, tried to peel it off, but it had adhered to his skin–just as it had adhered to Hugh.

In his panic, he failed to notice the rubber slave pulling down his pants, but he looked down it time to see a gooey maw open up where it’s mouth should be, little more than a hole drooling latex, and then it had engulfed his dick. He fought for a moment, but the sensation overwhelmed him, and he allowed his slave to pleasure him, watching the latex on his palm squirm and grow over his whole hand. He didn’t know what was going to happen to him, but pretty soon there were going to be two rubber drones in the room, and as scared as he was…the pleasure he was feeling was too good to resist.