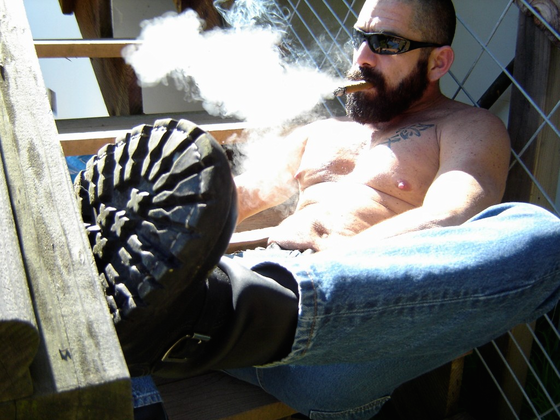 Fuck, you hate these shitty apartments, you have got to move somewhere a bit nicer, or your neighbors are going to drive you insane. You pull up, home from work, and get out of your car, seeing your newest neighbor, some roughneck kind of fuck, sitting sideways on the one staircase up to the second floor, where both of your apartments are, foot up on the railing, blocking all access.

You go over, dreading any sort of interaction with the guy, smoking his cigar, exhaling thick plumes all over the place. “Hey, could you move?” you ask, “I gotta get to the second floor.”

You just stare at him for a moment. “Seriously? You’re gonna make me climb over you?”

“Yeah? And what the fuck am I supposed to do while you’re smoking?”

“You can lick my boot, boy, and stroke that little boy cock of yours until you nut.”

You roll your eyes, but get down and start licking the sole of the boot which is planting on the railing, hauling your cock out of your pants and stroking it hard. The rubber’s cleaner than usual at least–last week, there was a big chunk of dog shit you had to scrape off with your teeth and choke down. A couple of people walk by, and stare at you like you’re crazy, but it’s not your fault! This fuck’s just in the damn way, is all–it’s his fault.

That one’s a bit harder–he’s started making you do that more often now, but after a few seconds, you turn on your cock, and feel the piss drench the front of your work pants, running down to your knees, where it spreads out on the pavement below you. He taps off a long cinder of ash and keep smoking, but he’s about finished–he switches boots and you clean the other one, and when you’re done, he stamps out the butt and gets up, finally letting you passed, climbing up the stairs ahead of you. You walk a bit faster hoping to get to your door before–

“In here boy, daddy needs some help for a while.”

You look over, and he’s at his own door, groping himself. You grit your teeth, but follow in after him. A new apartment, this week, you promise yourself. Like you’ve been promising yourself for two months now, since Daddy moved in, but something tells you this week won’t be the week either. Oh well, maybe the next one, you hope, but probably not that one either.