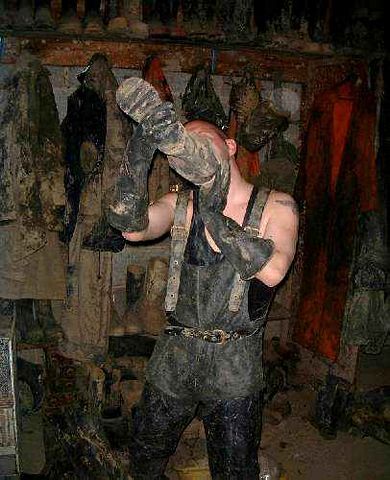 When Jared bought the house in foreclosure, the bank forgot to mention that none of the previous owner’s possessions had been moved out, and when he arrived to inspect the property, he discovered that the place was filthy. Apparently, this house flip was going to be a bit more difficult than he’d imagined, and so he started throwing shit out.

Things were going fine until he discovered the piles and piles of gear in the basement, and for some reason, he found himself compelled to put on the rubber gear…and service it. Over the next few weeks, his obsession grew until he couldn’t bear to wear anything else, and then he arrived.

The knock on the door came as a surprise–Jared hadn’t been expecting anyone, especially not the fat, hairy, stinking man on his doorstep, the man wearing nothing but some rubber waders, and Jared lost it, down on his knees, licking the filthy rubber clean right there on the porch.

The man hadn’t ever really planned on giving up his house after all, and now he had a new slave with enough capital to keep the mortgage paid off for years to come.