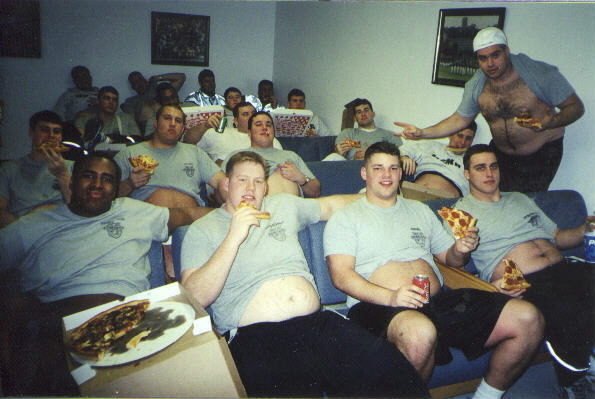 “A New Coaching Position” Part 2 of 5

Look, I know I shouldn’t have done it, I was their coach, these guys trusted me, but they were threatening to turn my son into a fat fistpig, what in the hell was I supposed to do? It was easy–all they wanted me to do was organize a pizza and movie night for the team at this private theater a little ways out of town, and they were going to take care of everything else–though they suggested that I get out of there before the film started.

Days passed, and no one heard anything from the the team, but somehow there was no uproar when the entire football team vanishes all at once, so obviously I wasn’t the only staff member being blackmailed. A couple days later, it was quietly announced by the school that the football program had lost funding and been cut–now, to top everything off, I was unemployed too.

I camped out at the theater. Outside the room, I could hear them all, still in there…doing who knew what. Vans arrived. Men in grey uniforms took mountains of food and soft drinks out of them and into the theater before leaving again. They all had on these special goggles, and I knew that if I was going to find out what happening here, if I was going to put this right, I would need to get a pair.