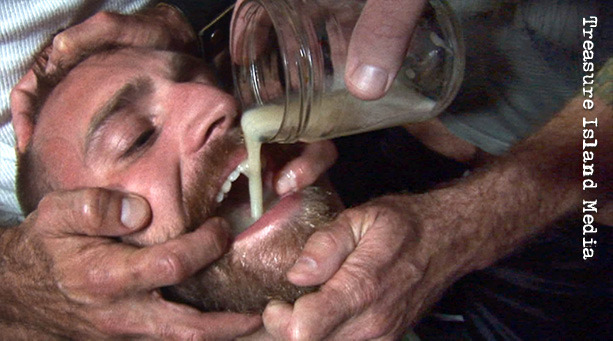 “Get it all down his fucking throat—don’t miss a god damn drop!”

A dream, but god, what a dream. Troy sat up in his bed, sweating, wondering where in the hell that had come from. The details of it were already fading, but the circle of young men surrounding him, forcing whatever that had been down his throat—what a nightmare.

He got up and went into the bathroom to piss, but stopped when he saw his reflection. CUMDUMP. It was tattooed in huge letters across his chest, and he couldn’t believe it. He ran back into the bedroom and found his phone. Wednesday—how was it Wednesday? He’d gone out on Saturday, and lost three days? What about work? What had happened to him?

Regardless, he had to cover it up and get to the office, and figure out what was going on. He opened his closet, but instead of the usual selection of conservative suits, there was only…leather, and rubber, and…and…

When he next came to, he was kneeling on the floor in front of the door, wearing rubber shorts and a leather harness, waiting. Waiting for what? He didn’t know, for someone to come. There was the sound of a key in the door, and then a group of men came in. “Ready for the party, Cumdump? I brought some new friends for you to suck off.”

“Yes Sir, use me as you see fit, Sir,” Troy answered, almost mechanically.