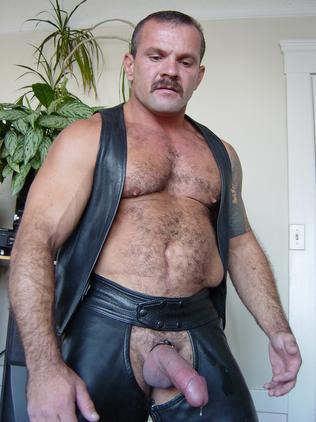 Yeah, I guess my dad’s skin doesn’t great–there are a few odd lumps in places, but in a back room, who pays attention to that? I enjoy his maturity too much to care. Yeah I’m twenty-five, but with no facial hair and a skinny body I’m doomed to twinkhood. I always hated how my dad ridiculed me, and called me a faggot. Still, things have a way of turning out for the best.

I hadn’t expected the potion the old man had given me to work, but hell, what’s the worst that could’ve happened? Well, I suppose he could have died or something, but even that would have been alright in my book. Man, the surprise on his face when he felt his insides start hollowing out, leaving him as nothing more than a suit of skin–fuck, he was terrified. Of course, he’s mostly angry now when I put him on, but there’s nothing he can do about it. I have access to all of his memories, so I can go to work as him, and then play all night long as the leather bear I’ve always wanted to be.